What Happened on Amazon During Black Friday and Cyber Monday 2016? 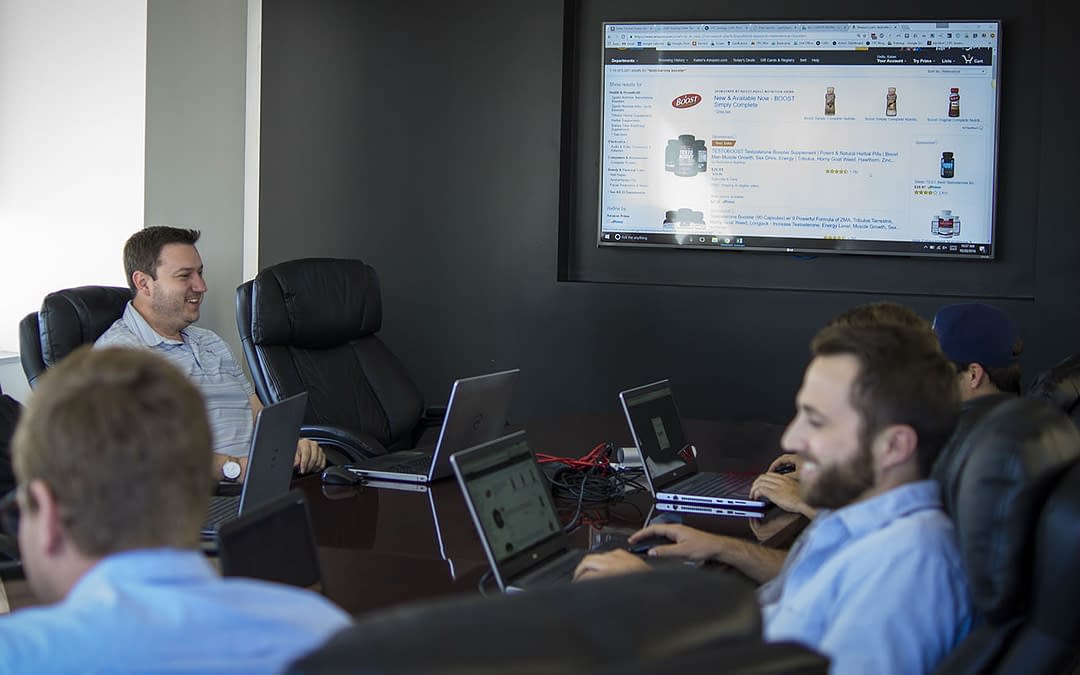 How were your Amazon sales during the Thanksgiving holiday week and into Cyber Monday?

In terms of the most popular shopping days, Cyber Monday came out on top overall online, not just on Amazon. According to MarketingLand, “Consumers spent roughly $3.4 billion online, which just beat Black Friday’s $3.34 billion.”

Sellers noticed the shift, too.

“Of course although I expected Black Friday to have been just as good but [Cyber Monday] for sure was way better,” said one seller on an Amazon Facebook group.

Overall, opinions varied–so of course, we had to get to the bottom of this, based on data from our clients.

Here’s what we saw during one of the biggest shopping weeks of the year (Week-over-Week percentages):

Now, for the trends that we believe drove those numbers.

Here’s the WoW shift in clicks on Sponsored Products from mid-August to the week of Thanksgiving: 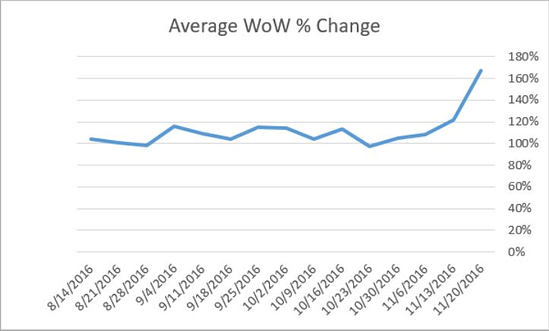 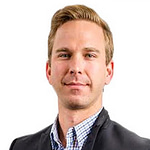 “In the past, they would reject them if it wasn’t your brand or logo. We tested out more lifestyle or holiday images–not your standard or default image and those ads started getting 10-15% more volume.”

Sponsored Product Ads CPCs Increased, But Not When Expected 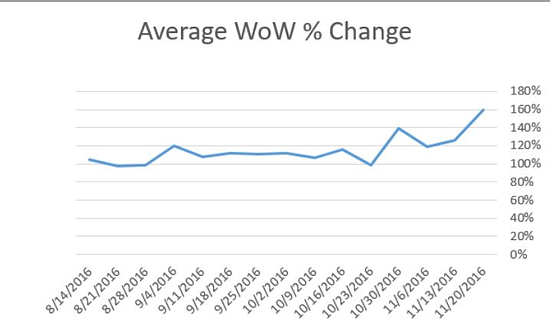 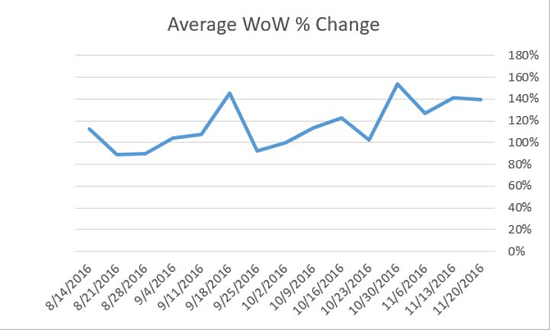 For several clients we noticed CPCs were higher during the week of 11/6 heading into Thanksgiving week, then it decreased as the week went on. 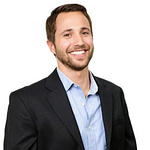 “Several clients saw higher CPCs for Sponsored Products on Monday and Tuesday during Thanksgiving week, and then they went down later in the week,” says Ethan Pilkenton-Getty, a Manager of Marketplace Channel Operations at CPC Strategy.

So why was the competition in Sponsored Products so fierce early on? 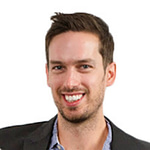 “It’s possible CPCs were higher because deals were lasting all week, and many sellers were trying to get ahead of the game,” says David Cooley, Manager of Marketplace Channels at CPC Strategy.

“This could have lead to sellers maxing out ad budgets earlier in the week thus dropping out of the auction later in the week, or could have led to inventory stock-outs which could have created less competition in ad auctions,” adds Getty.

There’s also a possibility that Amazon opened up more ad placements during the holiday week, which could have reduced CPCs overall–but that hasn’t been confirmed.

Another potential reason? Well, shoppers weren’t as sucked in by the concept of Black Friday.

But overall, we didn’t notice that any particular day really accelerated sales for our clients, and we saw the same thing play out for our Facebook clients.

Again, part of this can be attributed to the fact that Amazon’s Black Friday deals were extended all month, and customers knew that Cyber Monday was coming up right after Black Friday. 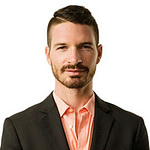 “Black Friday deals are no longer just for Black Friday–they’re turning into longer deals,” says Pat Petriello, Senior Marketplace Strategist at CPC Strategy. “As the deals are available for a wider time frame and on mobile, many shoppers opted to buy on the Monday before Thanksgiving all the way to the Monday after.” 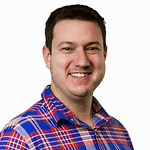 “People are getting trained on how this season works,” adds Jeff Coleman, VP of Marketplace Channels at CPC Strategy.

“Those one-day tactics are a lot more effective for brick and mortar because you won’t be able to be there every day. But online, people are getting conditioned to understand how this works. It’s nice in that you have a longer window, but you can’t just throw everything at the wall, you need to have a strategy for the entire season. They know they can come back–but if you’re not there when they come back, or your products are out of stock, you’re missing out.”

Shoppers Used Mobile More Than Ever

Last year, studies showed that almost 70% of Amazon’s holiday customers shopped on mobile devices. This year, Amazon announced that mobile orders on Thanksgiving exceeded both Thanksgiving and Cyber Monday in 2015.

So what does this mean for our numbers?

Although a lot of sellers are still knee deep in Q4 (and still hoping for strong sales all the way through December), it’s important not to relax too much come January.

“Most sellers think that seasonality is over Dec 26th, but that’s far from the truth,” says Cooley. “The peak of the holiday season is just before Christmas, but sales will still be well above the weekly average through December and into January. Experienced sellers understand this concept, but if this is your first Q4 selling on Amazon, you need to plan appropriately for inventory levels, not just through Christmas but well into January.”

“People write off January–but Q1 is turning into a continuation of Q4,” says Petriello. “It’s a time of year when everyone has their gift cards from the holidays, and it’s really cold and dark in a lot of parts of the country are snowed in, which makes for prime shopping time.”

Get a better Amazon strategy with our FREE GUIDE 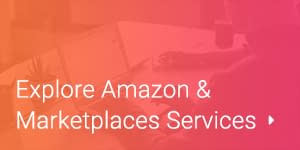