The Ultimate Guide to Kickstarter Campaigns

Crowdfunding has become immensely popular in the last decade. Creatives use it to fund their latest films, projects and recordings, while entrepreneurs leverage it for new start-ups, products, inventions and the like.

And it all started with Kickstarter campaigns. The original crowdfunding platform launched in 2009 and has been booming ever since. Today, the platform has accepted nearly $2 billion in financial pledges from 9 million backers and counting. 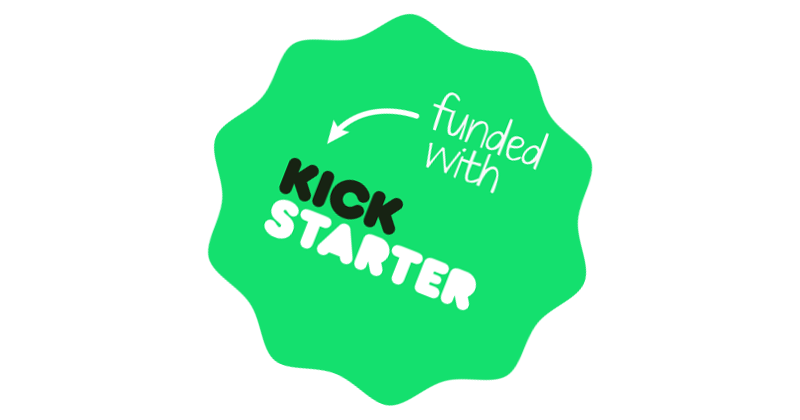 But it’s not a “build-it-and-they-will-come” scenario. Kickstarter might be a popular platform for raising cash, but it still takes work. In fact, only about 36 percent of all campaigns are successful. 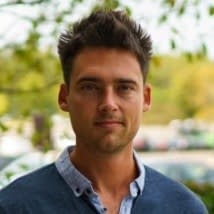 Matt Cannon, Senior Producer at Zivix (who launched Jamstik+ on Kickstarter, raking in nearly $800,000 in backing) knows the struggle of marketing on a limited budget:

There are so many new products that are coming out, you have to find a platform that’s going to do the most for you and amplify your story. Whether you’re a startup with a product idea or a product that’s been moving along…make sure to use the right platforms for yourselves at the right times.

Sometimes it means having the patience to prepare yourself for a crowdfunding campaign, and sometimes it’s about taking the jump into Amazon Launchpad or a program like that. You gotta get yourself out there. We don’t live in a world where you can just throw up a website, pay for ads, and start selling millions of dollars in products.

7 Tips For a Successful Kickstarter Campaign:

Use this guide to light the way.

The first step is to know your role. As the campaign creator, you’ll be responsible for marketing your campaign, telling your story, responding to (and updating) backers and handling all the logistics for rewards and orders.

But for many entrepreneurs it can be difficult to be both the “inventor” & the “marketer” of their product. 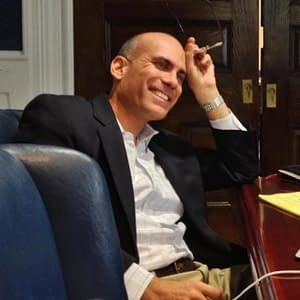 What we do is we take the makers and we turn them into marketers. We expose them to a lot of different marketing options and then they figure out what works best for their product.

The hope is that the mastermind group will help entrepreneurs look beyond the standard logistics of running a campaign and develop a holistic view of their product development and marketing strategy.

Great Kickstarter campaigns have a story that brings people in. After all, you’re not just asking for people to buy a product or service — you’re asking them to help you to get that product or service off the ground in the first place. They need to buy into it, feel excited about it and relate to your overall goals and mission.

Another critical element is leveraging other social channels to get the word out.

For example, one question to ask yourself is “How can I use Facebook advertising to promote my product before/ during the launch of the campaign?” 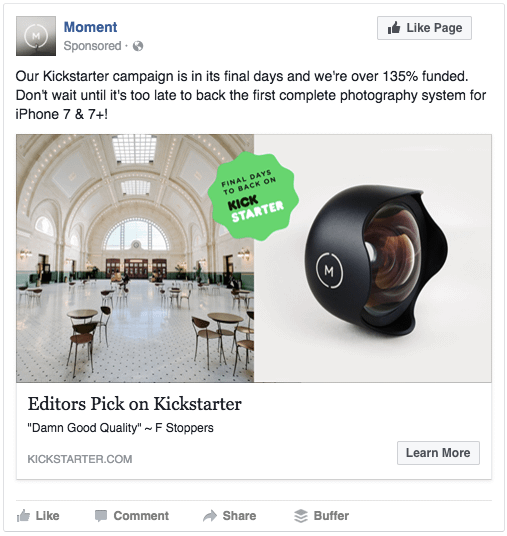 According to Moreno, Facebook ads can help startups identify their audience and narrow down their demographic but in general – entrepreneurs should experiment and market their product(s) across a variety of channels including but not limited to Facebook, Instagram, Twitter, Amazon and Google advertising.

“If you isolate your strategy to just Facebook marketing – you could ultimately miss segments of your target audience – which could be spending more time on Twitter,” he says. 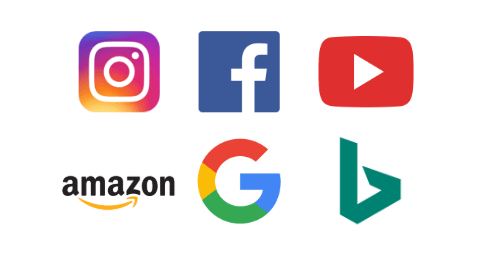 The better the rewards, the more backers will pledge, so put some thought and effort into the rewards you offer. A T-shirt is easy, sure, but what could your backers really use in their lives? What are they interested in? What could make their lives easier, more fun or more enjoyable?

Come up with rewards that align with your mission, serve a need for your backers and get the word out about your campaign simultaneously.

A good example: Running a Kickstarter campaign for a unique new running shoe? Make extra-padded, branded socks a reward, or throw in sole balm with every pledge.

You should also be careful that your rewards make the donation price point. “Giving away” a $1 sticker for a $50 donation won’t just turn people off — it might even offend them. Make sure your rewards feel like a good deal to your donors at every price level.

Looking for more reward ideas? Kickstarter has a list of 96 reward ideas (and some of these suggestions won’t cost you a dime!) 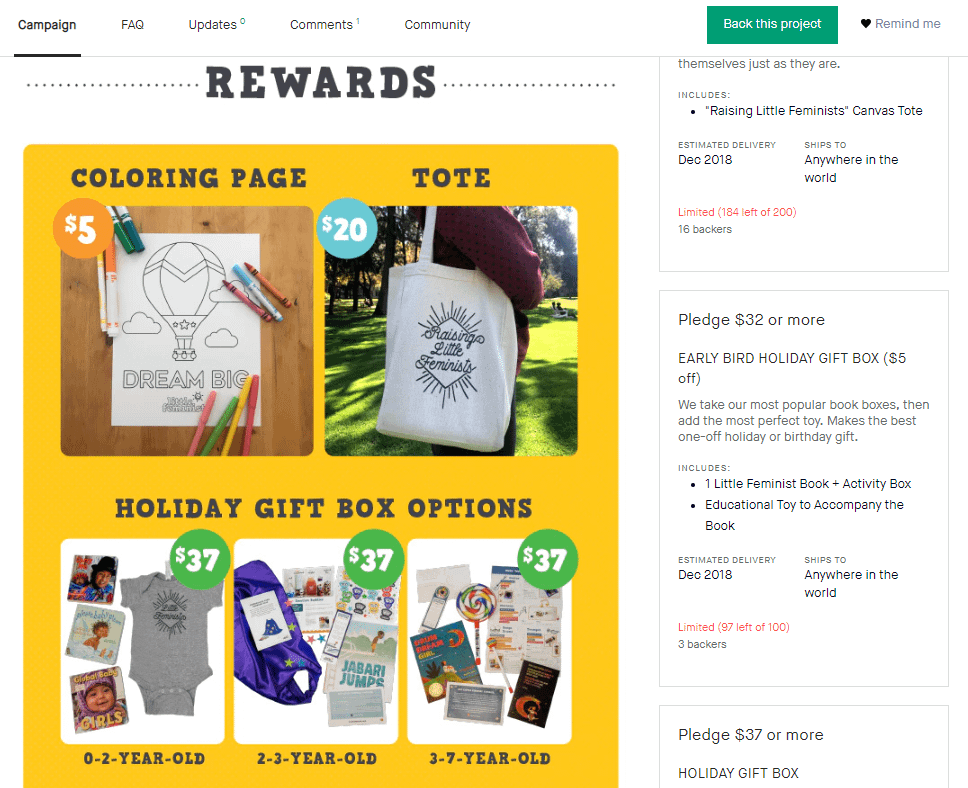 4. Have a logistics plan

Don’t forget that your Kickstarter campaign is about more than just raising money. You also have to deliver — both your rewards and your final product.

Have a plan in place to produce, pack, ship and deliver your promised rewards, and go ahead and price out what those shipping costs might be.

Waiting too long to work out these details will lead to unwanted delays and logistical errors that cost you cash (and hurt your reputation in the long run). Take note of a few of the biggest crowdfunding failures- and don’t make the same mistakes. 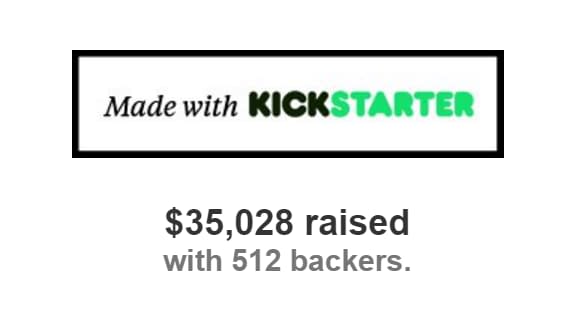 Your donors are generally interested in helping you succeed, so keep them in the loop about what’s going on. Tell them where you’re at in your efforts, what’s been happening on your end of the operation, and when they can expect to see the fruits of their labor (ie their donations).

They have a stake in this project too, so treat them like the investors that they are — and show them their money at work in photos, updates, emails and more. 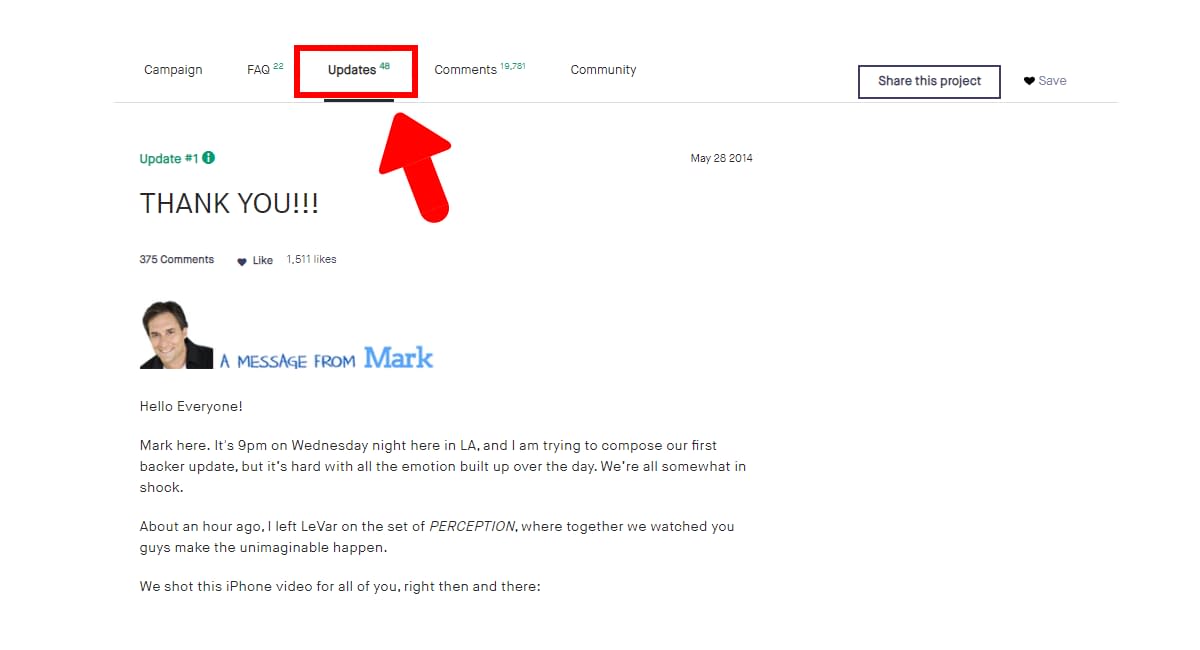 Remember that you need to make your goal in order to access those pledges, so don’t ask for $100,000, when you really only need $15K to make your project happen.

Keep your goals realistic, and if your over-excited backers surpass that, then that’s great! You can always run a second campaign or start an online store later, once you’ve accomplished the goals you initially set out. 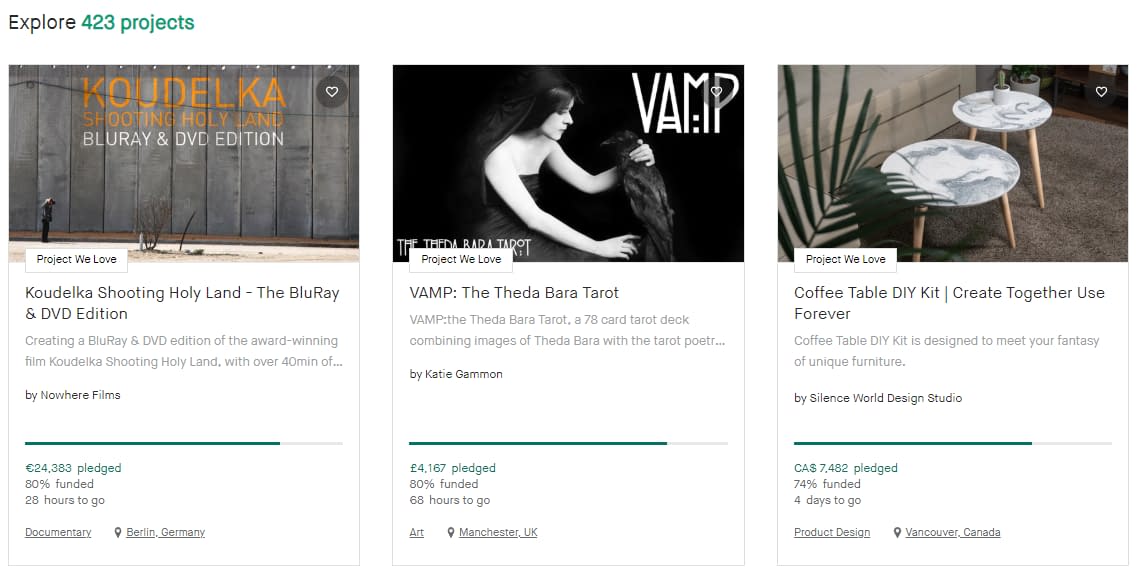 At the end of the day, a Kickstarter campaign can be a solid way to generate buzz about your project, as well as get the funds you need to take flight. Just keep in mind: your donors are your investors. Deliver, keep them in the loop and build a rapport with them, and you’ll be well on your way to success.

According to Moreno, successful entrepreneurs don’t see setbacks as bad, they see it as an opportunity and this when the real work can be done.

“It’s likely you will hit more than few bumps in the road throughout the product development and marketing process including manufacturer complications or packaging issues.”

“As for Amazon startup programs such as Launchpad or the Kickstarter Collection, Moreno encourages successful Kickstarters to take advantage of these new and upcoming opportunities. I think that Kickstarter’s ecosystem can reflect in some ways how well a product will perform on the Amazon Marketplace.”

To learn more about starting a Kickstarter campaign, email tara@cpcstrategy.com.