It’s the question with an answer that eludes many of us: why do some posts go viral with engagement, while others wither and die off without so much as a few courtesy likes?

If you produce content for social audiences and still struggle with Facebook’s News Feed algorithm, you aren’t alone.

The good news is that Facebook’s new algorithm isn’t much of a black box anymore; Facebook has slowly leaked how exactly it ranks and prioritizes content in users’ News Feeds.

Here’s how Facebook’s algorithm works in 2021 with five expert tips on how to increase the lifecycle of your Facebook content.

The Facebook algorithm ranks all available posts that can display on a user’s News Feed based on how likely it is that user will have a positive reaction to the post.

Facebook now ranks and prioritizes content posted from friends over publishers, with a focus on what the algorithm determines as “meaningful interactions,” with response to feedback from individual users’ surveys also playing a role in what they see, and don’t see.

“The algorithm works to balance the interests of both the advertiser and the consumer in order to drive efficient performance while maintaining a positive ad experience. Within the auction, the winning ad is the one that drives the most value to the overall platform with both these parties in mind, so it is integral to create content with your core audience top of mind.”

It is believed that Facebook’s new algorithm is based on the Vickrey-Clarke-Groves algorithm, which “operates as a closed auction.”

Facebook’s algorithm for ranking content on your News Feed is based on four factors:

Understanding the basics can help your content stand out

Advertisers looking to become more effective in their content strategy, both paid and organic, stand to benefit from a basic understanding of the algorithm.

If you’re aiming to reach Facebook’s 2.74 billion+ monthly active users (MAU), you are up against some steep competition:

Since the data controversy erupted around the social network in late 2017, Facebook has worked to improve transparency around how it ranks content on the News Feed, going public with their “Meaningful Interactions” update back in January 2018. In Mark Zuckerberg’s personal post regarding these changes, he shared the following:

“I’m changing the goal I give our product teams from focusing on helping you find relevant content to helping you have more meaningful social interactions.

We started making changes in this direction last year, but it will take months for this new focus to make its way through all our products. The first changes you’ll see will be in News Feed, where you can expect to see more from your friends, family and groups.”

While many Facebook users were understandably excited by the update, it was met with some concern by advertisers who were already working hard to stand out in the News Feed, and were now being given less space to shine. However, while the update necessitated some changes in how brands interact with their followers on Facebook, it certainly didn’t mean that loss of visibility was inevitable:

“The impact will vary from Page to Page, driven by factors including the type of content they produce and how people interact with it. Pages making posts that people generally don’t react to or comment on could see the biggest decreases in distribution. Pages whose posts prompt conversations between friends will see less of an effect.”

In short, Facebook called on brands to create high-interest content that followers would feel compelled to actually engage with—content that deserved space in their busy News Feed. As for how to do just that, see our tips in section 4 below.

While factors such as loyalty and intent, video and viewing durations, and originality have always been prized, Facebook has been placing an increased emphasis on these considerations since rolling out updates for video rankings. These updates call on video creators to:

The new Facebook algorithm is also better than ever at recognizing biased content. In an effort to curb misleading health claims, as well as falsely advertised medical products, they’ve made the algorithm even better at detecting spammy or clickbait titles.

Pages that share content Facebook labels clickbait will find themselves penalized within the algorithm, resulting in reduced distribution within the News Feed. However, once the offender stops posting this kind of content, their posts will no longer be penalized.

“Facebook continues to penalize those using deceptive advertising practices, recently filing a lawsuit in California against a brand that violated Facebook Terms and Polices. This action is one of many that Facebook is taking against advertising abuse on their platform.”

The goal of Facebook’s algorithm is to “show stories that matter to users,” according to Adam Mosseri, VP of Facebook’s News Feed Management.

With that in mind, you should know how Facebook’s different algorithm factors work together to determine which stories “matter” to a user.

Here are the four factors that determine if a story is relevant for a user’s News Feed.

Inventory represents the stock of all content that can display to a user on Facebook’s News Feed, which fluctuates based on user activity once scrolling has begun. This includes everything posted from friends and publishers.

Signals represent the information that Facebook can gather about a piece of content. Signals are the single factor that you have control over.

These are your inputs that Facebook interprets; type of content, the publisher, its age, purpose, and more.

You want your content to signal to Facebook that it’s meaningful and relevant to your target audience.

Predictions represent the behavior of a user and how likely they are predicted to have a positive interaction with a content piece.

Relevancy Score is the final number assigned to a piece of content based on the likelihood the user will respond positively to it.

As advertisers, the only part of the process that we have control over are the signals of our content.

These signals can be divided into two categories: passive and active.

Active signals include likes, shares, comments, and other active events that prompt engagement.

You should tailor your content to promote positive engagement, or what Facebook has defined as “meaningful interactions.”

Facebook Changes in 2020: Necessary Responses to Developing Events and Concerns

As we are all keenly aware, 2020 brought one word in particular into our everyday vocabulary – unprecedented. While certainly not a new word in and of itself, the year proved just how expansive its definition could be as we faced a global pandemic, racial justice movement, US wildfires, Australian bushfires, high profile arrests, the U.S. Census, and several closely followed – and heavily reported on – elections in the U.S., Myanmar, and beyond.

With the new challenges each of these, among other events, brought with them, Facebook continued to make adjustments to how certain news pieces were displayed, and how often, including:

4. Five Best Practices That Can Make Your Content More Meaningful

Here are some guidelines for keeping your content meaningful in Facebook’s eyes, based on Matt Navara and Paul Armstrong’s coverage of Facebook’s News Feed webinar.

1. Be a conversation starter

Facebook’s News Feed algorithm favors content that fosters positive interactions between your followers and others.

Any piece of content, from products to education to entertainment — should provoke conversation.

You want your content to prompt people to stop their scroll, interact, and share with one another.

Sephora, which consistently ranks #1 in L2’s Digital IQ Index — always strikes a balance between advertising and conversation-starting with well-crafted organic and sponsored content.

2. Focus on your audience

Your content should always be relevant to your core audience — the people you want to build a community around.

Products, education, lifestyle imagery — it should all build on your identity as a brand answering to a specific audience.

The new Facebook algorithm values content that performs well organically, and you can build off that momentum by boosting or promoting that content with ad dollars.

Content that already has strong organic traction means lower CPCs — which combined with ad dollars can act as a snowball effect for your content.

“Identify opportunities for ads based on organic post engagement and tap into Facebook Ads Manager tools by leveraging these posts in ads,” says Spicer.

Conversely, don’t waste ad dollars behind poor-performing organic content. It will have higher CPCs and cost you more while offering less in return.

“If a post is performing well with engagement, likes, and shares — then there’s an opportunity to place additional ad dollars behind to drive that performance even further.”

This is considered engagement baiting, it doesn’t add value or interaction for users. 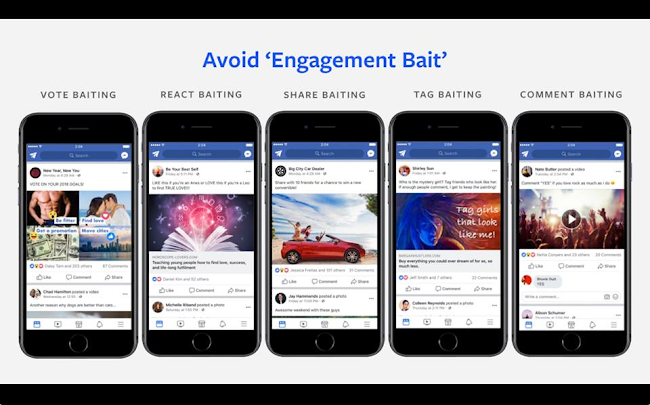 Keep track of how your different content pieces are performing engagement-wise.

Learn from your Insights data and then optimize from there.

The new Facebook algorithm is sophisticated and there’s no way to “hack it,” but there are simple steps you can take to make the algorithm work for you.

Apple Takes a Bite Out of Personalized Ads

It will also be important to be flexible and agile in the year ahead, adjusting your strategy as needed once the full impact of Facebook’s update to comply with iOS 14 guidelines is realized. As Tinuiti’s Liz Emery noted in her recent post focused on IDFAs, the primary areas advertisers will experience changes focus on ad retargeting and ad measurement:

It’s important to note that Apple users who opt-out of data sharing will still be eligible to receive Facebook ads, with the primary difference being the level of ad personalization. Recommended ‘next steps’ advertisers can make today to ready themselves for the upcoming changes can be found in our recent post—What is an IDFA (and How Will Apple’s iOS 14 Update Impact Advertisers)?

Want to work with our team of Facebook experts to help guide you through upcoming changes, and beyond? Reach out today!

Editor’s Note: This post was originally published by Greg Swan in April 2020 and has been updated for freshness, accuracy, and comprehensiveness.