Guide to Native Advertising in 2021

More media is being created and consumed every year–especially in 2020, where people are spending more time online than ever before. This opens up a lot of opportunities for advertisers and brands.

Unfortunately, consumers have seen so many ads that they’re suffering from ad fatigue.

Consumers have always been wary of obvious advertising, and it’s only getting worse. Native advertising was created as a way of subtly overcoming this resistance, and is even more important in today’s age of mass digital media.

What is native advertising?

Native advertising is an advertisement that has been made to match the format of its host platform. It’s design, layout and content would align with non-advertising content in order to blend in.

“Expect social media and ecommerce to become further intertwined in 2021. Selling continues to be a focus in the digital space and is growing faster than ever. With social at the forefront of everyday interactions, it makes sense for brands to push marketing out through these channels to reach the most valuable audiences possible.”

“Many platforms have already integrated native shopping features, including Facebook and Instagram, and it’s definitely on the horizon for growing channels like TikTok. Innovative ecommerce solutions and cross-channel buying experiences should be absolutely top of mind for marketers. Focus on streamlining the social shopping process so the customers’ transition from your feed to the checkout is as frictionless as possible.

As mentioned before, native advertising is best employed when it blends in with existing content. This means putting the user’s needs first–or at the very least, more so than in the usual ad format.

A good native advertisement is:

For example, a good native ad for a parenting blog would be a paid article containing tips for homeschooling.

A good native advertisement is NOT

Native advertisements were not always automatic, but now there are Native Ad Exchanges that automate the selling and placement of native ads.

How does native advertising work?

Native advertising works by not being disruptive to the user. Asides from a couple of subtle hints, the user wouldn’t know they were seeing an ad at all.

This makes users much more receptive to the ad’s message than a traditional ad. According to research, 77% of users do not interpret native ads as advertising. As a result, native ads collect 53% more views when compared to traditional advertising and have 40 times the click-through rate than that of classic display ads.

A short history of native advertising

Native advertising started showing up as early as the turn of the century. In 1918, the Saturday Evening Post ran a Cadillac ad that had no photos or even any mention of Cadillac in the text at all. Other newspapers also frequently ran news articles that were quietly paid for by sponsors.

As radio broadcasting became popular in the 1920s, so too did the practice of sponsoring shows. Brands would sponsor a show and get their products mentioned by the presenters. Advertisers sponsor programs of all types, from radio dramas to sporting events.

This practice continued after the introduction of film and TV entertainment. Advertisers were quick to buy product placement within the shows themselves. Daytime dramas were so heavily sponsored by laundry soap companies that they became known as “soap operas,” a term that is still used to this day.

Now we have the internet, and the explosion of digital platforms has given more opportunities for native ads and the companies that use them. Social media platforms Facebook and Twitter all employ native ads in their feeds, while digital publications like Buzzfeed publish sponsored articles that can only be differentiated by a “Suggested Post” or “Partner Feature” tag under the byline.

Native ad formats now also include video, such as those seen on YouTube and Facebook. They get labeled as Suggested or Recommended content, and are much more engaging to users than plain text content.

Native ads can be found across a range of different types and platforms:

Native display ads are the “regular” types of display ads that you can find in the feeds of social media platforms, retailer websites, news apps, and the Taboola-style “recommended content” at the bottom of each page.

Native content takes the form of blog or video content that’s published directly by the host publication. These usually carry a tag that says “Sponsored by” or “Promoted Content,” although they can still be hard to identify as an ad. In fact, 44% of readers have trouble identifying the sponsor of the native ad they read.

Native ad networks collect ad inventory from multiple publishers and offer these unused impressions to advertisers at premium prices. Often, the people running the ad networks will over promotions and exclusive deals depending on inventory availability. An ad network will also filter ad space offerings based on an advertiser’s specifications and targeting options.

Native ad exchanges are marketplaces that facilitate the buying and selling of media inventory between publishers, ad networks, and other ad exchanges.

The native ad exchange seems identical to a native ad network at first glance, but there are a few important differences.

Firstly, a native ad exchange sells inventory based on real-time bidding, unlike ad networks that set premium prices and then negotiate the final amount with the buyer.

Second, the native ad exchange functions more as an open market where advertisers can buy ads across multiple sites at the same time. The native ad network, on the other hand, is a broker that buys directly from individual publishers and then sells the ad package to an advertiser.

There’s no beating content when it comes to connecting with viewers. According to research, 70% of users would rather learn about products through content rather than through traditional ad methods.

The more well-researched and relevant a native ad is to the platform’s audience, the more engaging it becomes. Video native ads are the most engaging format by far, and can far outstrip other ad types in performance and ROI.

According to AppNexus, native display ads achieve a CTR that is 8.8 times higher than regular display ads.

Native ads have also been found to increase purchase intent by as much as 18 percent.

Consumers have become understandably more skeptical of advertising after so much exposure online, but native ads can actually build trust.

Contently conducted a survey and discovered that when a trusted publisher features native advertising for a trustworthy brand, 41% of consumers gain trust in that publisher.

Conversely, when a trusted publisher features native ads for an untrustworthy brand, 43% of consumers actually lose trust in the publisher.

The upshot is that brands have to be very mindful when creating content, because a poorly executed native ad campaign can have harsher repercussions than simply wasting your ad budget. It can actually erode your image and increase people’s skepticism towards your brand.

How much does native advertising cost?

According to research by CrazyEgg, a native advertising campaign can cost anywhere from $10 to around $200,000. The actual cost varies depending on the domain authority of the publication and its reputation. The lower the domain authority and cost, the harder it will be to reach your target audience.

But let’s break it down by price structure:

Native display ads are priced similarly to regular display ads: cost per thousand (CPM). The usual costs for these types of budgets run at about $10-20 per thousand impressions.

If you don’t want a generic native ad piece associated with your brand, some publishers offer to produce custom content for you for an additional fee. This custom content can take the form of ebooks, articles, videos, infographics, and more.

This custom content is of the same quality and depth as that of any other content in the publication–sometimes better.The Huffington Post even has its own partner studio, which is in charge of creating content for its paid partners.

This native ad campaign from Home Depot wins on so many levels: it’s interactive, it’s well-designed, and it fits the aesthetic and style of its publication (Apartment Therapy) very well.

Users are presented with a cartoon drawing of a multi-level house. Each room contains a stop-motion video with home upgrade ideas and links to the various products that people can buy.

While it’s very transparent about its commercial nature (it features buy-links to Home Depot, after all) it’s executed so well that it’s compelling on its own merit.

Many companies treat native ads as an opportunity to talk about themselves and their product, which defeats the purpose of a running a native ad in the first place.

But when Allbirds sponsored a post in the New York Times, they decided to look beyond themselves and inform NYT readers about a worthwhile cause: birds and how they’ve been affected by climate change. 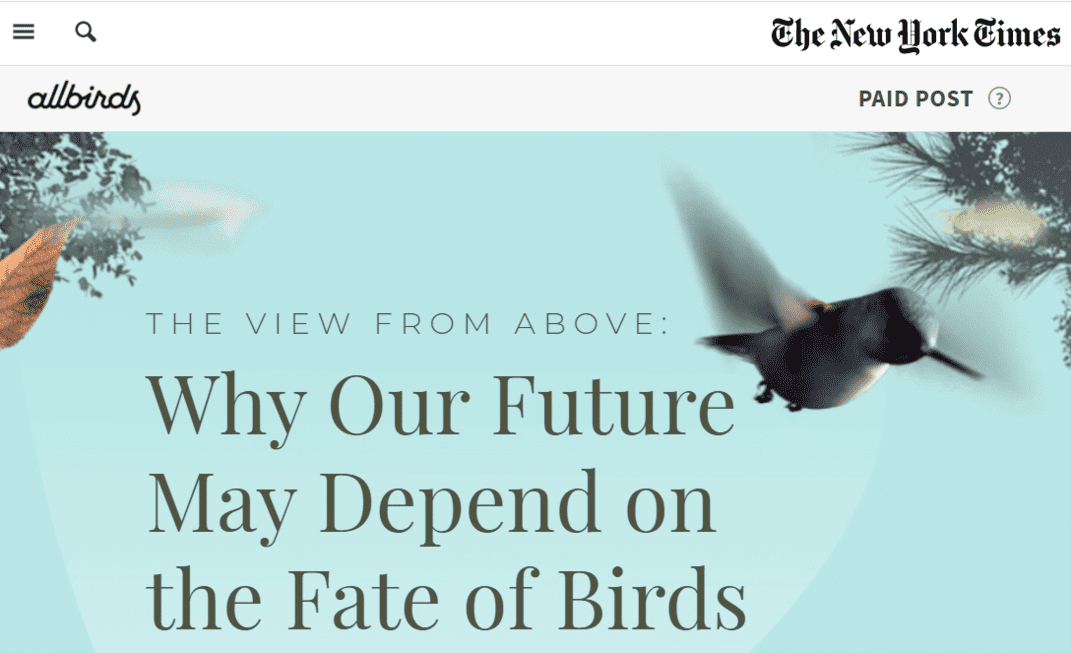 The text itself is a gripping read: all important and new information, with no mention at all of the Allbirds brand until the very end. But the company went further and added animation and other compelling visual elements to make the article a joy to read–even more than the NYT’s actual content.

You might not be familiar with the names Taboola or Outbrain but you are definitely familiar with their recommendation widgets. Those widgets are the boxes at the bottom of articles that say “Around the Web” and “Recommended for You” that appear on the majority of publisher websites around the web. In the Fall of 2020, Tinuiti partnered with Taboola and Outbrain to promote Ancestry’s DNA kits around the holidays when family is at the top of peoples’ minds.

Why native advertising matters in 2021

As you can probably already tell by now, native advertising is an essential part of any digital marketing strategy. So it’s no surprise that companies are predicted to spend over $52.75 billion on native digital display advertising by the end of 2020.

This number will only grow in 2021 as the pandemic tightens its hold on the US economy and people spend more time online. Display ads will become less effective the more users are exposed, and native ads will soon be the most reliable vehicle through which brands can get their message across to customers.

*This post was originally published in December 2020 and has been updated for freshness and accuracy.